Plantains differ from their banana cousins in that they have a lot more starch, and a lot less sugar. Because they're less sweet, they’re not that great to eat raw. When cooked, however, they have a savory, filling, potato-esque quality, to them, and they are a staple filler throughout Latin America, the Caribbean, and west and central Africa.

As plantains ripen, they becomes sweeter and their color changes from green to yellow to black, just like bananas. Green plantains are firm and starchy, and taste similar to potatoes. Yellow plantains are softer and starchy, but with a little sweetness. Extremely ripe plantains (black) have softer, deep yellow flesh, and are much sweeter. 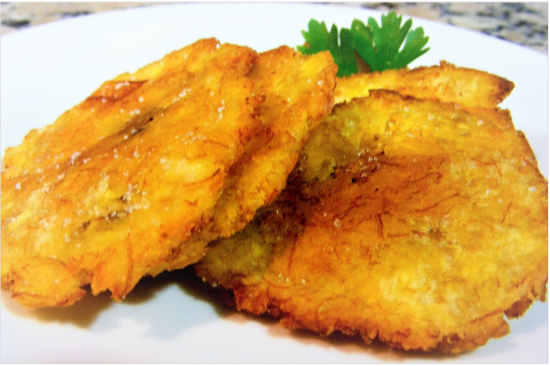 From the Spanish verb tostar which means "to toast"), tostones are twice-fried plantain slices. Green (unripe) plantains are peeled, sliced, and twice fried.

They are typically salted and eaten like potato chips or French fries. In Latin regions, the are usually served with mojo (a citrus-garlic sauce) or ají, a spicy sauce that often contains tomatoes, cilantro, ají pepper, and onions.

Plantains, like many current Latin American foods, were introduced during the African slave trade, to feed the slaves, who had been cultivating and eating them for thousands of years. People in the Congo, prepare tostones in exactly the same way, to this day.

Peel the plantains and cut into 1inch pieces.

Place cooked tostones, one at a time, onto a sheet of waxed paper, cover with another sheet, and
flatten them using a tostonera or the bottom of a metal can. (A tostonera is a wooden (or sometimes plastic)
press used to make flatten plantain sections into tostones.)

Fry again at 385 for approximately 3 minutes.

Mojo (pronounced mo-ho) is the Spanish name for a number of Latin sauces made with vinegar or citrus juice and
garlic.

It is a traditional accompaniment to the starchy root vegetables of the Hispanic Caribbean, as well as a marinade for
pork, chicken, and other local meats.

Chop up the garlic very thinly or crush using a mortar and pestle or food processor with salt to form a thick paste. In a mixing bowl, combine the garlic paste and juice, and let the mixture sit at room temperature for 30 minutes or longer. 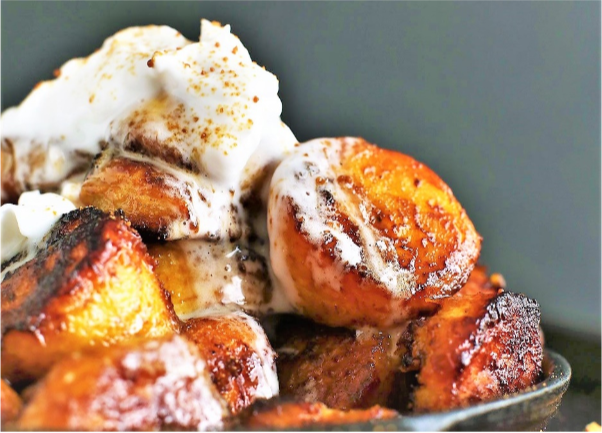 Plantains are a staple food in the tropical regions of the world, treated in much the same way as potatoes and with a
similar neutral flavor and texture.

Peel and slice plantains on the bias, 1/2-inch thick. Plantains should be very ripe (almost black.) 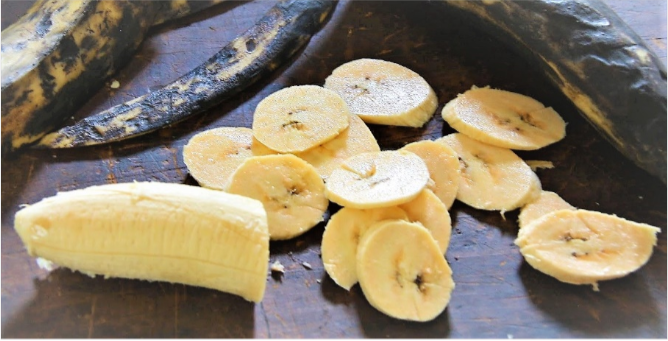 In a heavy skillet, melt the butter over medium heat. Add half of the plantains and fry them in a single layer for about 4 minutes on each side.

Remove with a slotted spoon and keep warm in a bowl. Repeat. 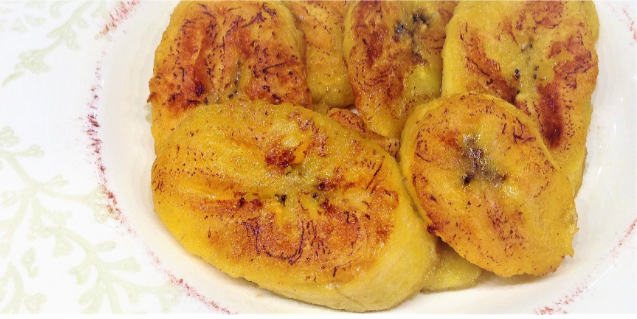 Drain and wipe oil from the same pan, combine the rum, brown sugar, butter, and salt. Stir over medium heat until the sugar has dissolved, then bring the mixture to a vigorous boil.

Cook for 2 minutes, until slightly thickened.

Return the plantains to the pan and stir to coat them evenly with the sauce.

Allow to cool slightly, and serve with whipped cream, or vanilla bean ice-cream.

Plan on one plantain per serving